Results: $32 Million in Actual Cash Recoveries with Another $18.5 Million in Identified 3rd-Party Claims

A 10 year review: In 2001, Vengroff Williams responded to an RFP for subrogation services from a multinational company with approximately 200,000 U.S. employees. The RFP was for one division. Although they had been using a prominent attorney group to handle their subrogation cases, they were interested in exploring other options for saving in the healthcare area. 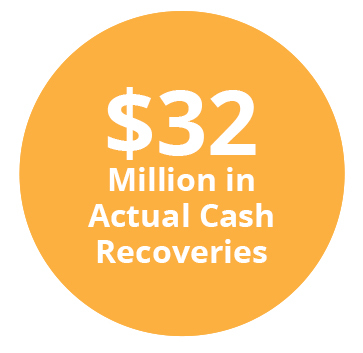 After consideration of all proposals and an extensive on-site review, the company awarded Vengroff Williams the contract to handle the subrogation services for one of the operating companies. We were also asked to review any past claims and to take over the management of those claims.

In 2011, after internal analysis of our recoveries as compared to the other vendors, the company awarded us the business for the company’s entire U.S. population. This encompasses several independent companies along with a separate union group. It includes disability payments and coordination with the pharmacy benefit management groups.

The program now covers 32 separate and reported groups with three administrators and a pharmacy benefit management group all consolidated on one platform with individual reporting to each vendor manager or division heads as required.

In the first year, we identified over 1,300 old claims totaling about $6 million in claims.

Three years into our contract, we were asked to take on a second group.

Once we established all the proper reporting and integrated their self-funded disability programs, we recovered over $3.2 million for that group, representing about a 1.3% recovery.

Since our coordination and consolidation of the various components of their corporation, along with consultation and updating of their subrogation plan language and COB provisions, we have recovered over $32 million in actual cash recoveries with another $18.5 million in identified 3rd-party claims.

The overall recovery percentage based on total spend is 1.13%.